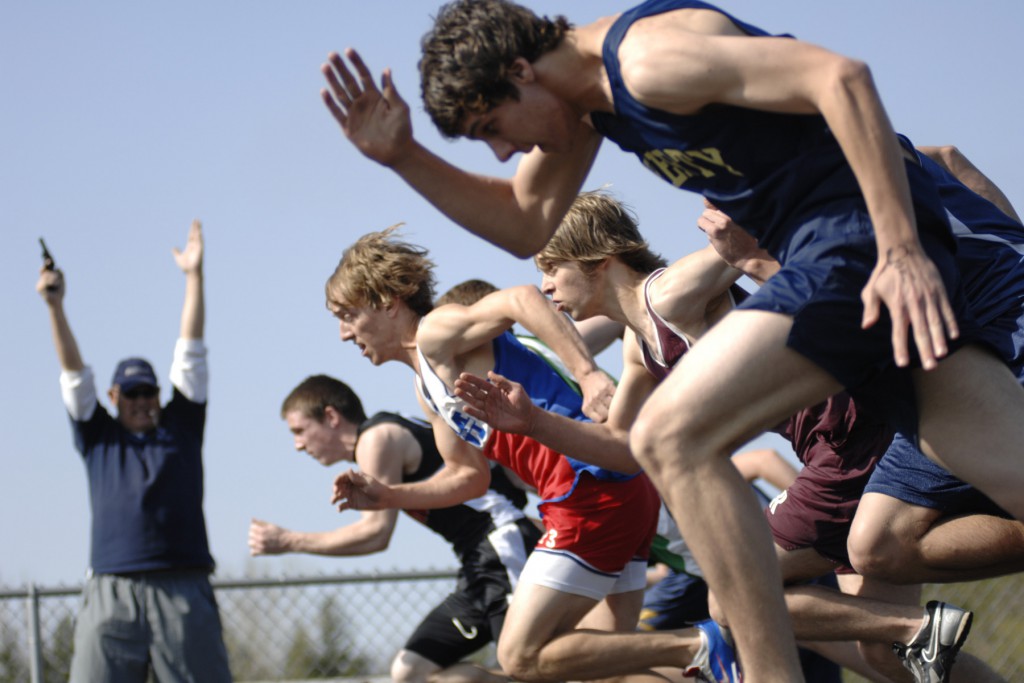 In competition, there are winners and there are losers, and every competitor has tremendous lessons to learn no matter where they are at the end of regulation.

At Liberty Classical Academy, we don’t shelter students from the reality of competition. It’s real and it can get intense. Winning and losing is part of life. And inspirational quotes that tell you “it’s how you play the game” point to an even bigger victory that athletes can go for: one that points to character and honor. In fact, Liberty athletes have a history of being commended for sportsmanship, which points to the tremendous work of our athletics staff and the strong character of our student athletes.

But winning at sportsmanship isn’t the only goal. If it were, our players wouldn’t practice. They’d just show up on gameday and hand out encouraging notes and energy drinks.

So why does winning matter?

Think again of the scenario we started out with, of you in the room full of people. Now imagine that you are expecting yourself to be the best among them. You want to be the one that comes out on top and achieve the goal that every other person is reaching for, and so you expect it to happen. You behave as though it will happen. Imagine that you’ve visualized every scenario and you’ve rehearsed every detail. Imagine you believed you could win because you’ve prepared to win.

Imagine that winning is an okay goal to have. Not arrogance or ego or an “in your face” intensity that’s condescending; but a true desire for greatness; for excellence in performance and result.

Our culture has lost its passion to win. We’re constantly in competitions where everyone's a winner, and we have no losers.

Without losing, we cannot win.

We are created to win. It is in our DNA. We are goal-orientated by divine purpose, and it’s fatal to our design to resist it.

So when we’re no longer driven to win (because it doesn’t matter, or we’ve lost our drive, or because we just don’t believe it’s possible), something in us dies.

Like most things, this isn’t a one-dimensional conversation. It’s not just about sports. We are not all competing in talent competitions or trying for a winning record or trophy. Many of us aren’t competing at all...at least, not in the traditional sense.

If you were to speak with a person who has “won” and ask them how they got there, they would ultimately talk about their character. They would tell you they did a lot of trying. They gave up being “normal.” They sacrificed. They learned how to do it right after lots of doing it wrong. Being afraid of the emotion of losing didn’t stop them. It fueled them.

At Liberty Classical, we want our students to be as ready for life as they can possibly be. And so we want them to understand the value of winning. We want them to see that winning is important because it’s how God made us. It’s a result of character and discipline that’s been built over time. It’s a mindset, a work ethic, and a commitment that doesn’t begin on gameday. It begins in moments of stillness. It begins when we visualize ourselves in that room full of people all wanting the same things. It begins when we wake up early even though the bed is warm and our eyes are heavy; when we refuse to compromise because that room full of competitors really needs us to compromise.

Winning has little to do with a trophy. A trophy is not the win. It just points to the actual victory. A trophy is the prize. Winning is because we have worked. We’ve sacrificed. We’ve lost some things, poured ourselves out into our goals, trusted in our giftings and passions, and made decisions in the most mundane parts of our days to make victory possible.

Our biggest competition is most often in our mind. It’s the lie that tells us we can’t; that we won’t; that we’re less. It’s the roadblock that we use as the excuse to not try. It’s the intimidation that says it’s not worth trying and failing again.

Winning matters because, when done right, it’s how we get to see the reward for the hard work of every day and every decision. It’s how we reap the harvest of sweat and toil. It’s how we experience that version of us that is divinely inspired.

At Liberty Classical Academy, on the courts and fields of competition, we’re building lives that inspire. That means that winning matters. It’s not enough to have good attitudes on game day. It’s about being a person of excellence and self-discipline in the moments of stillness.

Winning matters because it has more to do with your character and your commitment than a trophy in a case or a ribbon on your wall. It points to your character, to your willingness to make hard decisions and be truly extraordinary in moments of greatness and in moments of the mundane.

Please fill out the form below to place your bid.
0
0
Your Cart
Your cart is emptyReturn to Shop
Continue Shopping
Scroll To Top