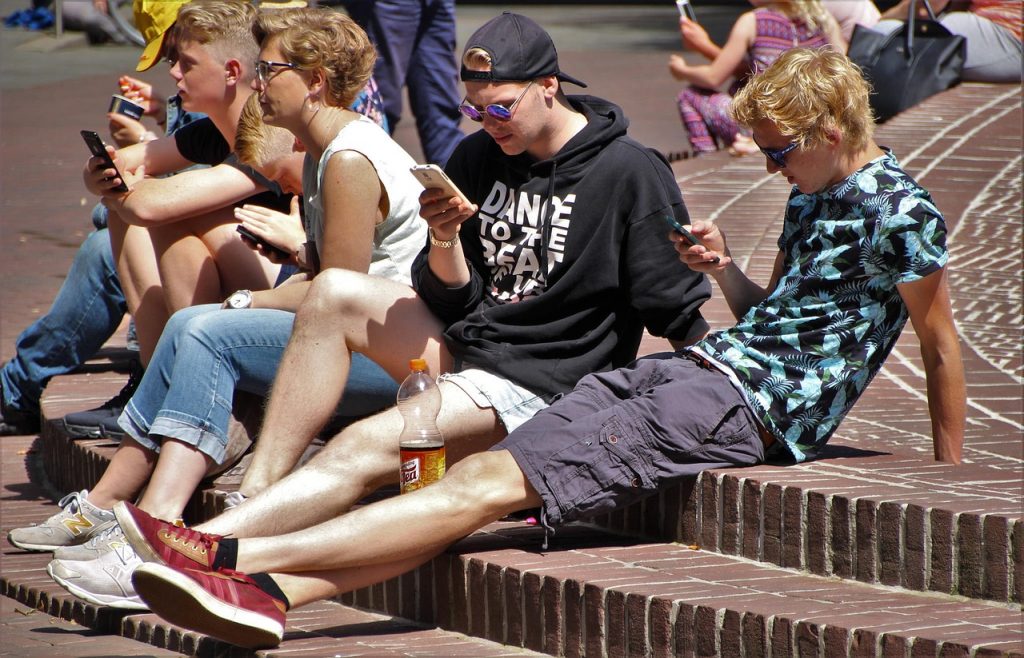 Teens and adults immersed in their technology devices, oblivious to the world around them, has become a familiar sight. In a digital world, the majority of communication is accomplished through a keyboard or touch screen, and kids no longer understand the basics of simple conversation. As social media connects us within the digital realm, it is creating a social skills deficit in our kids. Here is a list of the five most crucial, in-person social skills that technophiles of all ages, are losing due to technology.

Being able to sustain eye contact, and know when it’s appropriate, is a vital social tool. Looking at screens for more than ten hours a day takes away the ability to know what to look at when holding a one-on-one conversation. According to recent estimates, the average American spends more than five hours per day using digital devices on computers and mobile devices, and another four and a half hours watching television. Additionally, the average mobile user checks his or her phone 150 times a day.

The importance of eye contact in human relationships, whether at school or work, is difficult to underestimate. It is the strongest form of nonverbal communication and over 43 percent of the attention we focus on someone is devoted to the eyes. It also plays a critical role in the development of emotional connections. Eye contact can be a tool for influencing others. Looking at a colleague when speaking conveys confidence and respect. Prolonged eye contact during a debate or disagreement can signal standing one’s ground.

The ability to speak on the phone—clearly, confidently, and concisely—is becoming a thing of the past. The age of text messages, Twitter and Instagram has begun to really impair the younger generation’s ability to actually hold solid, professional conversations on the phone. In initial professional phone conversations, and emails, it’s important to introduce yourself, and be as detailed, yet concise as possible. The tendency to text rather than call people has left the younger generation hopelessly awkward and nervous over the phone. Lack of basic phone skills contribute to the inability to articulate or explain anything with depth of thought and feeling and requires back and forth connection.

The art of conversation is one skill many young people lack. Asking questions about others, actively listening, and being able to read other peoples physical social cues are all part of being a skilled conversationalist. The constant compulsion to look at a screen does not give those that interact with them the impression that they are invested in the present conversation. When engaged in face-to-face communication, social information is conveyed by vocal and visual cues in the context of the situation. Non-verbal communication is an important part of communicating and it includes facial expressions, eye contact, tone of voice as well as posture and space between individuals.

When individuals are ultra-focused on their own technological world, it can make one less aware of the present physical world around you. As technology and interruption become more and more prevalent, the negative consequences of not paying attention become more pronounced. Cognitive science research shows that the brain has limited bandwidth; dual-tasking compels the brain to pull from some shared, limited resource, slowing reaction time.

It can be very obvious when someone is bored, either with work, in a meeting, or in a dialogue. Part of having good social skills knows when to focus and pay attention. A recent study by Microsoft Corporation has found the digital lifestyle has made it difficult to stay focused, with the human attention span shortening from 12 seconds to eight seconds in more than a decade. Heavy multi-screeners find it difficult to filter out irrelevant stimuli and are more easily distracted by multiple streams of media. Human attention span is smaller due to the growing presence of technology gadgets. The desire to be constantly connected can compromise attention spans in exchange for being better multi-taskers.

A Word with Mr. Woernle

Fathers for Liberty – the Start of Something Bigger at Liberty Classical

Posted in Blog Post, Featured, Technology
0
0
Your Cart
Your cart is emptyReturn to Shop
Continue Shopping
Scroll To Top