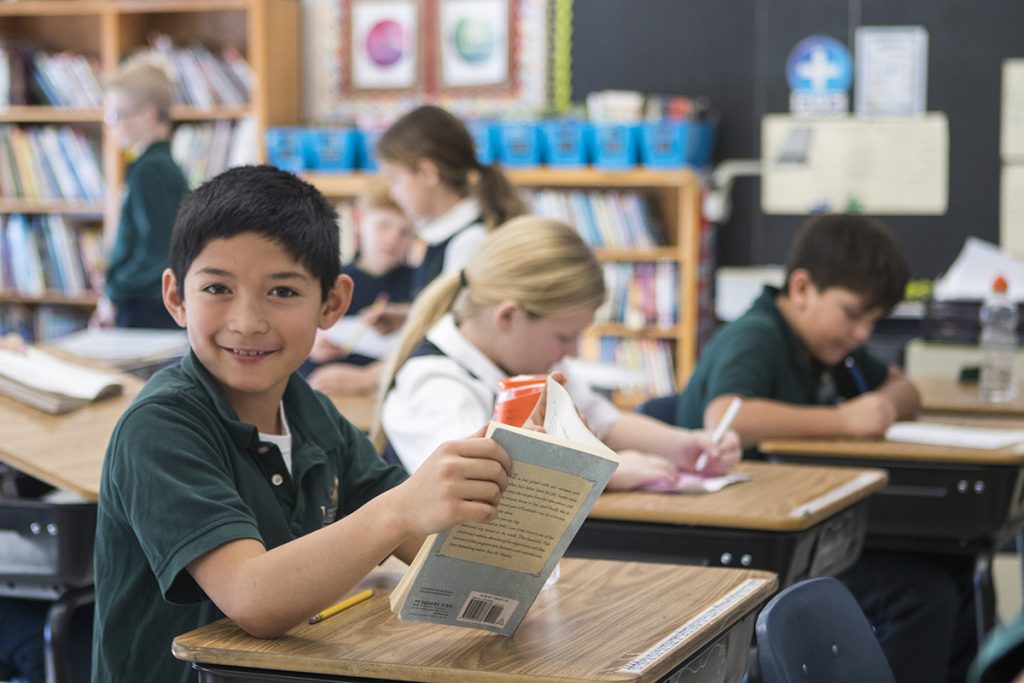 In nearly every conversation you have with Rebekah Hagstrom, Liberty Classical’s founder and headmaster, you’ll hear some reference to these words: “impact our culture for Christ.”

It’s why Liberty Classical was started.

The work that Liberty is doing to educate students in the classical tradition, to build a premium educational experience for kids of any age, is ultimately about impact. The word “impact” has different meanings to different people. For Liberty Classical, it's not about what we say or what we do, but rather about who we are.

To illustrate this and to unpack it with our students, Mrs. Hagstrom took some time to set the course for this school year in chapel earlier this month. Each year at Liberty Classical, the leadership chooses a theme of some sort to take us from September through May. Sometimes the theme is related to personal development. Sometimes it’s related to expanding our vision or even our enrollment. Sometimes the theme is more focused on our surrounding community or on a specific value within our philosophy of educating.

Unity, Character, and Commitment to God

In light of the circumstances in the world around us, this year’s theme of unity, character, and commitment to God is more essential than ever.

Unity is about what happens inside the walls of our school as well as outside of them. Opposing parties in our government no longer eat together. Differences of opinion have become reasons to despise someone. Unity aggressively confronts that divisive spirit.

Commitment to God is ultimately a statement of humility; of submission. Recognizing that God’s plans are different than our own can lead us to either resist Him or to sink deeply into trust.

What does it really mean to make an impact in our culture for Christ?

Impact isn’t necessarily about being the biggest or the loudest. We’ve seen that time and time again in Scripture and in life. On one hand, we know that it’s our love for one another that will demonstrate our love for Christ to the world around us. On another hand, our culture is becoming increasingly hostile toward differences of opinion. To disagree with a man seems now more than ever to be a reason to dishonor him. The hostility that surrounds us is polarizing, and everyone’s being asked to choose a side. Republican or Democrat. Mask or no mask. Black or white. Pro-Trump or anti-Trump. Left or right.

And yet a different narrative exists within the economy of God’s kingdom. With examples in Scripture like that of the story of Shadrach, Meshach, and Abednego (see Daniel chapters 1-3), we see what it looks like when young people stand up to the culture around them. But they didn’t stand up with signs in their hands and hatred in their voice. They stood up with a steadfast reliance upon God. They stood up with a humble posture toward their leaders. They chose to be more faithful and loyal to the God they served than they were to the culture they were entrenched in.

Unity, character, and a commitment to God came to these men in Scripture because of choices they made. They chose not to indulge in what their surrounding culture permitted them to indulge in. They chose, instead, to take ownership over their lives, their faith, and their choices. They chose to stay committed to God even when it would have been easier - and safer - to do otherwise.

But the result? These men saw God quite literally show up in their lives. They impacted a culture not with their wise and persuasive words or even the volume of their voice, but with the strength of their character and commitment to God.

Let’s join our students in this invitation extended by Mrs. Hagstrom. Let’s not let disagreements be a reason to dishonor, and let’s model that for our children. Let’s be intentional about the things we let into our eyes, our minds, and our spirits. Let’s give God permission to show up in our classrooms, in our school, and in our homes. And let’s join with our students in impacting our culture for Christ — not with signs in our hands or hatred in our words, but with unity, character, and a deepened commitment to God.

It's going to be a good year. Let's see what God does.