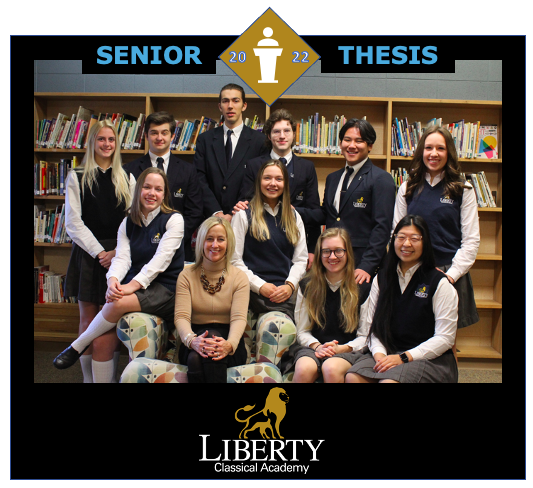 Each student presents a 10 minute persuasive speech on a morally controversial topic, followed by a challenging 10 minute defense of their thesis to a panel of judges in front of a live audience. You will leave with a greater appreciation of the type of education your child is receiving at Liberty...and see first hand how we are building the next generation of moral leaders to lead, serve, and inspire.

This is the capstone of a Liberty education that you won't want to miss!

Abortion is a widespread topic that has been debated for a long time, but is especially argued for and against in modern day. Abortion’s long history has led up to many arguments, especially the argument about whether a human fetus is a living being or not, and when it becomes a person. The only possible time for a human being to become a person is at the very beginning: conception.

Since the launch of Bitcoin at the end of the Great Recession, cryptocurrency has grown to capture the world by surprise. Bitcoin, along with other digital currencies, endured a humble beginning filled with criticism and mockery, but it now trends in almost every aspect of society. The market of virtual currencies in its totality currently reigns number five in terms of market capitalization of assets, topping big name corporations such as Amazon and Tesla. This thesis asserts that cryptocurrency is a unique asset worth considering for its potential financial gain in addition to the values that distinguish it from fiat currency.

Olivia Clarin - Women in the Military

Though a myriad of previously deemed “men’s roles” have in today’s world been universally accepted as equally applicable for women, some remain open to question. Whether or not women should be allowed to stay in combat roles within the U.S. military has been a topic scholars have continued to grapple with. As individuals’ beliefs continue to spread across the spectrum, reasons for the original combat ban have resurfaced.

The use of Ivermectin for the treatment of COVID-19 has electrified the country over the past year, with everyone from physicians to farmers voicing their personal opinions. Despite the positive view from the public, the FDA has refused to approve Ivermectin for this new usage, leading many to question either the efficacy of Ivermectin or the validity of the FDA’s decision. This thesis will argue that Ivermectin ought to be approved for the treatment of COVID-19, due to both the long-recognized safety and cost efficiency of the drug as well as its effectiveness as a preventer of viral replication.

Mandating COVID-19 vaccines within a workplace has been a very controversial topic within this past year. Within 2020 and 2021, thousands of people have been fired, terminated, or have resigned from their job due to vaccine mandates. This has left America with multiple job openings and a limited selection of workers to fill them. This thesis will argue that companies in the United States should not be able to fire employees solely for not receiving a COVID-19 vaccine.

Gene editing is a new technology that in recent years has undergone rapid development. As the application of this technology beyond the laboratory becomes more of a reality, debate about how society should react to its advancement is occurring. This technology has the potential to give life-changing treatments to millions of people, but it also carries a risk of causing more harm than good. This thesis will argue that gene editing research should be allowed to continue until it is proven to be either unsafe or ineffective, since it has a great potential to benefit society, and many of the potential risks are not as dangerous as some individuals make them out to be.

AI is a powerful and rapidly growing technology, but debates over its true nature and philosophical implications remain unresolved. Specifically, scholars continue to disagree on whether AI can be conscious, and on what consciousness means in the context of AI. This paper will argue that AI could become conscious in the future. It will do this by rigorously defining consciousness and related terms, and then using these definitions to argue that AI consciousness is a possibility.

The death penalty, or executing a criminal primarily in the case of the crime of murder, has been a consistently debated issue in modern times as the West has moved further towards its abolition. The United States is the last major westernized nation to still practice it. This thesis will argue that the death penalty should be abolished specifically in the case of murder.

Brandon Carmack practices corporate litigation at Fafinski Mark and Johnson. He graduated from Mitchell Hamline School of Law in 2020 and Hillsdale College in 2010 with a degree in political economy. More importantly, Brandon and his wife Jessica Carmack enjoy raising their two daughters, Madison and Eloise at their home in Chanhassen, Minnesota. Brandon also serves on the board of Agamim Classical Academy and plays piano for Redeemer Bible Church’s worship team.

Justin Daeley teaches philosophy and theology at the University of Northwestern - St. Paul and is a father of children at Liberty Classical Academy. Justin earned his PhD in philosophy at Middlesex University, London, England. He has published articles in academic journals like Sophia, Religious Studies, and Philosophia Christi. He has a forthcoming book entitled Why God Must Do What is Best: A Philosophical Investigation of Theistic Optimism. Justin is currently researching questions related to the nature of forgiveness.

Renee Carlson serves as General Counsel for True North legal, the legal arm of Minnesota Family Council, where she passionately advocates for life, family, and religious freedom through litigation, policy, and education initiatives. Prior to her current position, Renee worked in private practice assisting nonprofits, churches, and private schools, specializing in religious liberty protections. She also served as a Minnesota Assistant County Attorney, and worked at the state legislature prior to attending law school. Renee is a Blackstone Legal Fellow and Allied Attorney with Alliance Defending Freedom (ADF), and a founding board member of the North Star Law and Policy Center. Renee and her family are passionate about their church, where her husband serves as the Senior Pastor. A California native and UCLA graduate, Renee enjoys spending time with her family, wakeboarding, hiking, and learning new winter sports.

Howard Root is the retired Chief Executive Officer of Vascular Solutions, Inc., a company he founded in 1997, took public in 2000, and grew into a worldwide medical device company that he sold to Teleflex for $1 billion in February 2017. Over the company’s 20 years, Howard led Vascular Solutions in inventing, developing and launching over 100 new medical devices used to improve the lives of patients suffering from cardiovascular disease. The motivation behind the sale of Vascular Solutions and Howard’s voluntary early retirement is a true-life legal nightmare that is detailed in Howard’s book: Cardiac Arrest: Five Heart-Stopping Years as a CEO on the Feds’ Hit-List.

A special thank you to the mentors and judges for your time, resources and support of our Liberty students!

Why We Do What We Do: The Senior Thesis
Posted in Event Archives, Featured, Home News and tagged Archived
0
0
Your Cart
Your cart is emptyReturn to Shop
Continue Shopping
Scroll To Top