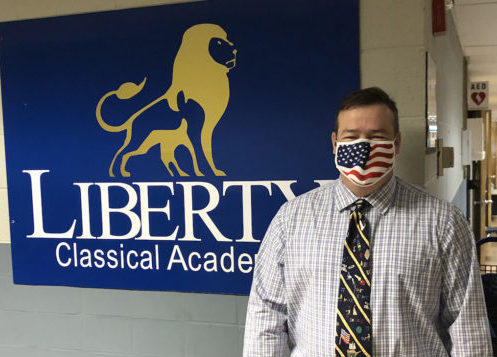 I had the privilege of sitting down with Eric Woernle, the new assistant headmaster of Liberty Classical Academy. The conversation started with a back and forth exchange about education, work, family, and the weather. Soon, it moved toward miracles and the works of God, and how God uses the most difficult things in life to build the most beautiful. He reflects on God’s love and sovereignty in his life in the most practical ways, almost like he’s still talking about the weather.

The cadence of his speech seems to match the tempo of his life. It was obviously cultivated in the deep south, with a posture that makes you think he's exchanging poetic thoughts or war stories with an old friend rather than introducing himself to new colleagues. He's comfortable and relaxed without being dismissive or irreverent. He’s not in a hurry, but rather sits back and contemplates his words before he speaks them. He's thoughtful but still direct. It's a unique blend to see in someone.

As I sat with him, I learned that Mr. Woernle has more credentials than most people I know, but it’s not something he leads with in titles or with any sense of entitlement. He’s humble. He has an undergraduate degree in History and Greek, a Masters in Christian and Classical Studies, a Masters in Education as well as an Education Specialist degree. He’s a retired US Army Major, having led troops through two deployments in Afghanistan. He's even worked deep in the NSA (like, “I could tell you but then I'd have to kill you” kind of deep).

Our talk went all over the place, from Forrest Gump’s run across the bridges of his hometown to the game of Peek-a-Boo and our faith stories. Eventually, we moved back into family and marriage. He and his wife Tara have been married for nearly two decades and have four kids. This past summer, they transplanted their life from Greenville, South Carolina to the Twin Cities — to help move Liberty Classical into its next season of building lives that inspire.

Classical to the Core

Eric is not new to classical education. For those who follow classical education, you’ll appreciate that he comes from the Carolinas - where many of the significant conversations about classical education are happening. He’s been the head of a classical school and has been trained by some of the most prominent modern members of the classical education movement. When asked what makes the Classical tradition's style and approach to education so meaningful to him, his answer was as practical as anything else he says:

“Most of today’s education is trying to introduce abstract thought before kids are ready, which can actually be harmful to them. Classical education addresses the natural development of children, on a journey from concrete to abstract.”

We’ve talked about this before at Liberty—about how education that doesn't align with a child’s natural development is actually working against the child. And as Mr. Woernle seeks to confront the challenges ahead of him and build a school that’s truly preparing kids for a world in desperate need of truth, goodness, and beauty, it’s clear that for him, it's coming from deep within; from a place of conviction and passion to see kids discover something that's bigger than all of us.

A fellow US Army company commander from one of his deployments to Afghanistan once gave Major Woernle a gift with this inscription:

“To a man whose politeness never hindered his ability to be effective.”

And that's the summary that makes the most sense as you try to reconcile the resumé you learn of when you get to know him with the man you experience in conversation. If you take the time to sit with him, you'll find that his humble posture and passion for excellence are as evident as his charm and his love for Jesus.