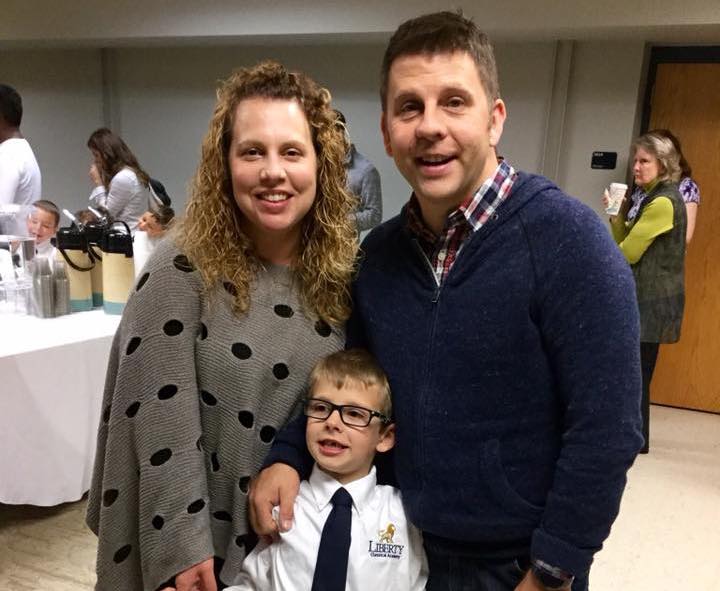 If you haven’t met Emily Boog at Liberty, just give it time. You will. Emily and her husband Ryan are active and dedicated volunteers here at the school. If we were to fully report everything that they’ve done to build our community, we’d take up far too much blog real estate (if that’s a thing). Emily has focused her attention on volunteering in many capacities, including extensive work for our scholarship drive…taking on just about any role she’s asked to take on. Some of those roles, she would say, seemed beyond her abilities. Some of them were definitely outside her comfort zone. All of them were because she’s driven by something beyond fundraising or education.

For Emily, volunteering is a chance to connect with people. It gives her the chance to get to know more families, especially those she wouldn’t ordinarily rub shoulders with. Since being a part of the Liberty community, she’s been a room parent for two years. She’s worked on the scholarship drive for four years. She’s filled various temporary roles that were vacant (like the role of “Lion’s Eye”). She's organized and orchestrated Liberty’s 15-Year Celebration (and she worked alongside, rallied and led a team of other parents to help). She’s been one of our volunteer coordinators. She’s worked with Parent Connect. She’s worked in the cafeteria. She’s worked with leadership. She’s served. She’s presented. She’s followed and she’s led.

Emily Boog has committed so much of her time to making Liberty Classical what it is…and what it is becoming... because to Emily, Ryan and their boys, Liberty is more than a school. What anchors them here is not the academics (though she loves the education her kids are getting) or the location (though it’s close to home). What anchors them is the community…the family they’ve found here.

A few months ago, somebody asked her how she knows so many people at the school. As she thought about it, she realized it was through volunteering. She started volunteering because she loves this community, and as she’s volunteered, her love for the community has grown.

And that’s what the upcoming scholarship drive is all about.

This year’s theme is something we’re going to start talking about a lot more…in our scholarship efforts, in our conversations, and at our different events. It’s ultimately a message that summarizes why Liberty Classical Academy exists.

We aren’t raising money for the scholarship so that people can afford Liberty Classical. Well…that’s not true. That’s exactly what we’re doing. But that’s not the real “WHY.” Emily, and people like her throughout our community, are committed to the scholarship drive because of what it does to build this community. This community thrives because of the people that are a part of it. The classmates who become teammates and best friends. The families who would have otherwise never met who start a small group or start having dinners together. The double dates among Liberty parents. People are what this community is all about and it’s what makes the scholarship drive such a passion project for so many of our volunteers.

The scholarship drive is all about building our community…not just with more people, but with more relationships, more connections, more opportunities to impact the White Bear Lake area and the surrounding communities…and ultimately culture…with Lives that Inspire.