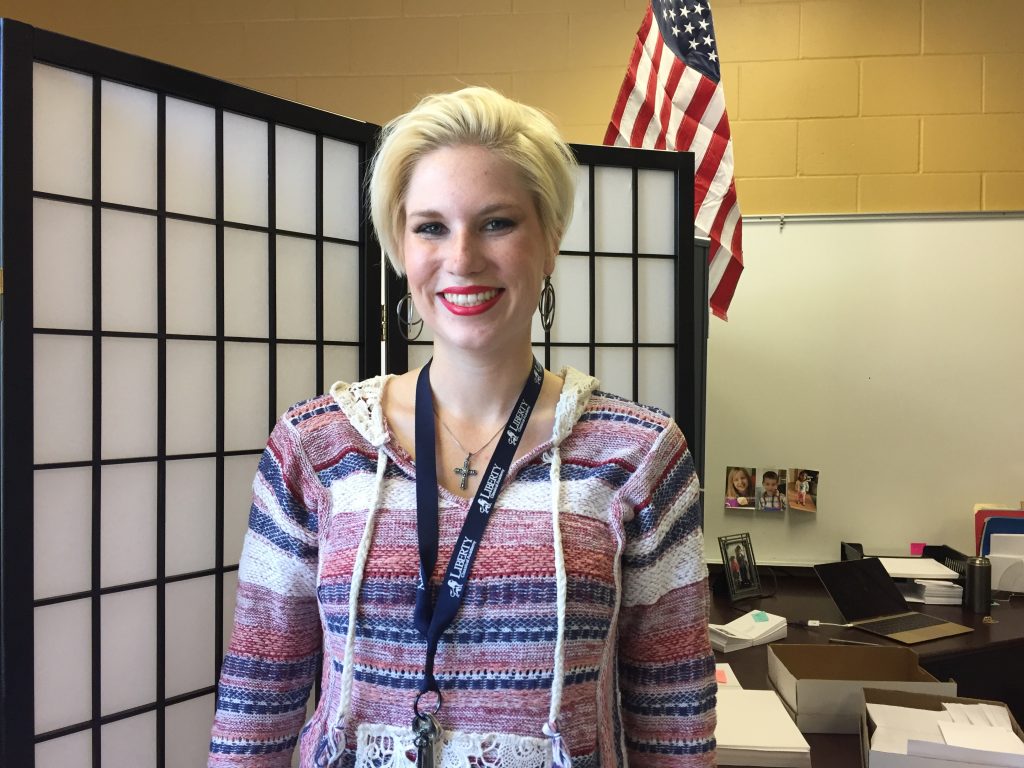 Anna Brooks is the new Latin teacher for Liberty’s middle school. She moved here from Colorado with her husband Carter (along with cats Momo and Pabu and a scorpion she calls Chomsky) for his job with Delta Airlines. The two of them met at the University of Colorado, Boulder, in a Medieval Icelandic Sagas class (yeah…that’s a thing).

What we have with Mrs. Brooks is something unique among our faculty and staff. Anna is a classical education teacher who was classically educated. The school Anna went to as a child is actually called Liberty Classical Academy. When she was in college, she ran the “Classics Club” and got a degree in classics. She taught fine arts at Vanguard Classical Academy in Aurora, Colorado. And the list goes on.

When it comes to teaching, her favorite moment she described was recently watching as kids figured out how to translate The Iliad. When she watched light bulbs going off as they began to understand complex literature in another language, she watched them grow in confidence. They bloomed right in front of her. She watched them experience what she once experienced when she was a student.

Classical education is where she learned to love learning.

Her perspective on education is something she demonstrates in the way she sees the world and the way she sees the classroom. She loves travel and has been to more countries in Europe than states in the USA. She’s actually going to Germany this weekend (thank You Delta Airlines!) for a little R&R. She’s a student of life and people…not just books. And she plans to never stop learning, even if it’s when she’s hosting trivia or studying more Medieval Icelandic Sagas. She has taught dance. She has worked closely with students with special needs.

To really capture the passion of Mrs. Brooks and the way she sees life as one enormous opportunity, you’ll have to spend time with her. While that may not be possible, you can still see her in her element as she educates our children. She’s not in the classroom to fill minds with knowledge. She’s there to build lives that inspire. She sees it as her job to ignite that love for learning in them that she experienced as a child.

Welcome to Liberty Classical Academy (of Minnesota) Mrs. Brooks. Thank you for pouring inspiration into our students!

The Quarantine and Your Family